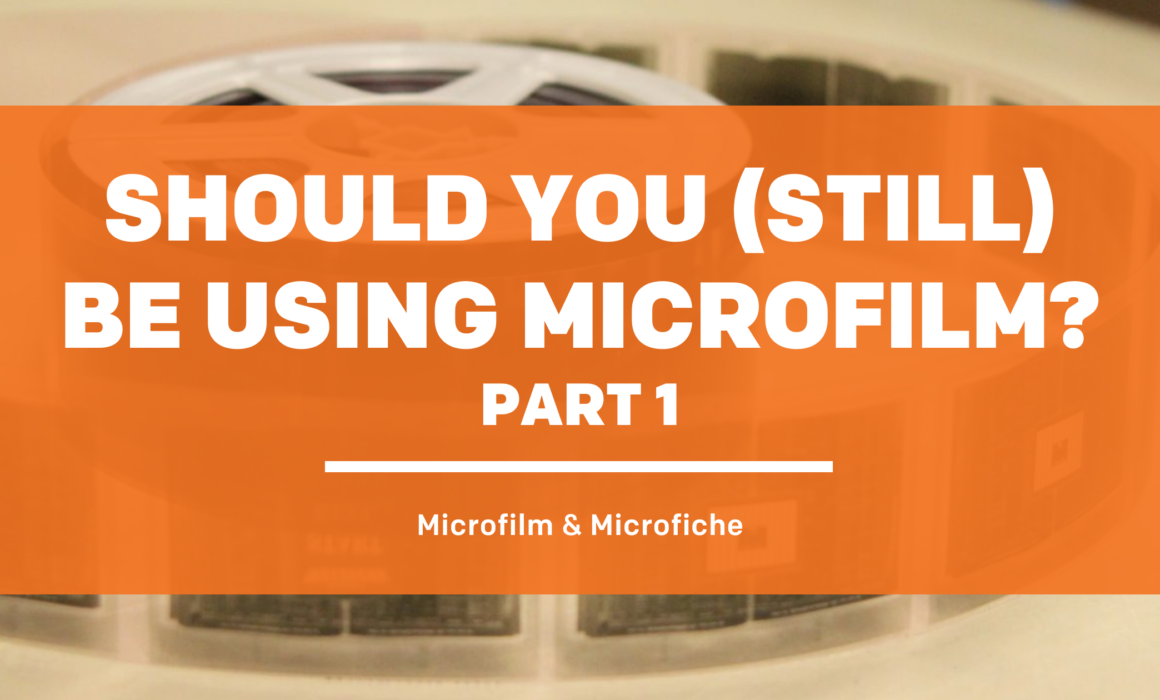 First developed in the 19th century, microfilm technologies (a.k.a “microforms”) store tiny, accurate images that can be scaled up to a readable size with only a light and some magnification. A microfilm reel can store thousands of images in a small space. Thinner, more accessible sheets of microfiche hold 80 images in a space smaller than half a page of paper. These options allow for very compact information storage compared to full paper documents, and as a result, they came into widespread use throughout the 20th century, especially in libraries and archives.

Today though, microforms are commonly considered relics from a bygone era; before the days of digital computers and the internet. New microfilms are exceedingly rare, most date back to the late 1990s or before, usually long-term records, stowed away in libraries and archives. Once digital information systems became widely available, the once-revolutionary technology very quickly fell into obscurity and disuse. Despite having many advantages over paper, microfilm could not hope to keep up with digital’s efficiency, speed, and flexibility; and computers have only become more powerful and available since then.

One of the primary advantages commonly credited to microforms is their longevity. Authors, archives, and microform companies have pointed out that, theoretically, microfilms should last as long as 500 years, so long as they’re stored “properly.” That may sound pretty straightforward; if something is important enough to include in a record, it’s probably not something you want to risk losing by improper care.

It’s worth noting, however, that microfilms haven’t been around long enough to confirm that projection, and yet many microform libraries have already deteriorated, some of them only a few decades old. These impressive, theoretical claims aren’t necessarily inaccurate, but they do implicitly obscure the two primary drawbacks of microforms: they’re delicate and hard to replace.

At first glance, microfilms do not appear exceptionally delicate. Even after a decade in storage, a microfilm reel can still survive being dropped or shaken, and boxes of reels, probably don’t require “FRAGILE” labels (unless, of course, they are very old). By “delicate,” then, we mean that longevity anywhere close to 500 years requires expensive and precise environmental controls, meticulous care, and consistent handling protocols. They’re not exceptionally delicate in the here and now, but living up to the claim is a delicate and difficult process.

Microfilms degrade in a number of ways, including (but not limited to) Acetate Decay, Redox, and Embrittlement. Following proper storage protocols and precautions can prevent all of these from happening to your films, but as you’ll see, such preventative measures are very complex, and often more expensive than other alternatives. Every individual aspect contributing to that complexity is another way for mistakes to be made that could compromise your films.

When the acetate compounds in your film start to decay, they turn into acetic acid, which gives off a distinctive vinegar smell. Not only is the breakdown of the acetate compounds a form of damage in and of itself, the product of that decay, acetic acid, then goes on to continuously damage the other components of the film. The results can include delamination, anti-halation colour distortions, plasticizer exudation, shrinkage, and fading dye (if your film is in color).

According to Craig Saper, a professor of Language, Literacy, and Culture at the University of Maryland, Baltimore County writing for The Atlantic, back when microfilms were more ubiquitous, Vinegar Syndrome was so common that “…librarians and researchers sometimes joked about salad being made in the periodical rooms.”

Exposure to pollutants and moisture in the air causes the acetate compounds to break down, producing acetic acid. The reaction isn’t instantaneous, of course, but without strict air quality and humidity controls, every time a film is outside of an airtight container there’s a chance it will begin or accelerate the acetate decay.

Additionally, the fumes released by the acetic acid as it eats away at one film can spread through the air to kick off the same reaction in another film sitting next to it. If there are any leaks in your air-tight containers, this contagious problem could potentially spread from one film to an entire collection.

Acetate decay isn’t inevitable, but it is irreversible, and once it sets in your film has only a short time before it’s completely unusable. Any information not saved by creating new copies will be lost forever as the film begins to curl and the images decay.

Creating film copies of documents for the first time is time-consuming and expensive. Creating duplicates of older films is a little easier since you won’t have to process all of the original paper documents, just the condensed reel form; thus, duplicating damaged films should be cheaper than creating new ones.

However, you are still physically creating a new film, so duplicating isn’t as simple or as cheap as it might sound. You also have to ensure that the new film has minimal exposure to the old film during the duplication process, or else the fumes released by the acetic acid could start the process all over again in your new copies.

Alternatively, you could decide to digitize these decaying files, turning them into PDFs or images instead. Processing a large number of film reels or fiche sheets can be time-consuming and expensive, but there’s no risk of further film decay with the end product, and it has the added benefit of making all that information compatible with digital information systems, and thus, with the rest of the world’s systems.

Silver is a common component in the chemical soup used to create microfilm, and when it’s exposed to moisture in the air, it tends to oxidize, turning into red or orange splotches on the film. These patches can obscure important information on the microimages and once it’s set in they can’t all be removed.

Unlike Vinegar Syndrome, refilming might not be the best solution. Once the silver spots have developed, the fact that they’re opaque means that any copy images will have black splotches where the silver obscured the light shining through the original film. Instead, painting Kodak’s brown toner onto the film can clear up the newest blemishes, and prevent more from developing. If you catch the problem early, applying the toner can prevent it from ever being a problem in the future, and save you from the cost of re-filming. But most spots are there to stay once they’ve developed, and if you don’t catch the problem early, there’ll be no way to recover the lost information.

Exposure to heat, moisture, or acidic pollutants in the air or storage containers all cause the gradual decay of the plastics that compose the base of the film. As the plastics deteriorate, they release acids that can further damage the film. The result is brittle, inelastic film that can’t bend or twist without breaking or flaking apart.

If your microfilm is stored on reels, then you won’t be able to unroll it without causing irreparable damage to it. If your microfilm is in the less common fiche form, you might be able to scan or refine it as is, but the further along embrittlement is allowed to progress, the more delicate the fiche cards in your sheets will become, making them vulnerable to the slightest twists and bends.

Although in the long run, embrittlement is irreversible, it is temporarily reversible if treated with solvents which return some degree of strength and elasticity to the film, for a little while. If done correctly, you can give your film enough elasticity to safely create copies. However, it’s important to keep in mind that the further an embrittlement problem advances, the less useful these solvents will be, and the less likely you are to be able to save your information; so it’s important to check up on your film regularly to screen for decay.

These are only a few of the ways your film records could decay, other problems include distortion/warping, decomposition of the gelatin base, silver fading or mirroring, and mould or fungus growth.

The other drawback of microfilm is the difficulty of duplication. The technology and expertise to create new microfilms have existed for decades and are still widespread. However, the market dominance of digital technology means that most film creation businesses have withered away, or have had to move on to other business models. The few that remain are usually the only service providers in their local area or have very little competition.

Low competition means that you are stuck with whatever filming businesses are available locally; if they do a good job, then great, but if they don’t they’re still your only option unless you’re comfortable shipping your films several hours drive away to another business you trust more. Limited options also means little to no redundancy: if a filming shop in your area goes out of business or is waiting on rare replacement parts for some of their old machinery, you’ll be out of luck.

In part 2, we’ll review the preventative measures recommended by experts to keep your microfilm viable for as long as possible, and attempt to answer the central question: Should you (still) be using microfilm?

Consentia has been working with microfilm files for decades, and our film specialists know how delicate and important your files are. For secure, reliable, high-quality digitization services, choose Consentia.

Get 3 Months of Free Document Storage.